Difficulty in swallowing (dysphagia) is common among all age groups, especially the elderly. The term dysphagia refers to the feeling of difficulty passing food or liquid from the mouth to the stomach. This may be caused by many factors, most of which are not threatening and temporary. Difficulties in swallowing rarely represent a more serious disease, such as a tumor or a progressive neurological disorder. When the difficulty does not clear up by itself, in a short period of time, you should see an otolaryngologist–head and neck surgeon. 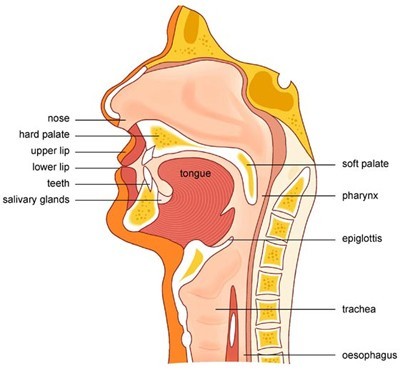 People normally swallow hundreds of times a day to eat solids, drink liquids, and swallow the normal saliva and mucus that the body produces. The process of swallowing has four stages:

Although the first and second stages have some voluntary control, stages three and four occur by themselves, without conscious input.

Any interruption in the swallowing process can cause difficulties. It may be due to simple causes such as poor teeth, il-fitting dentures, or a common cold. One of the most common causes of dysphagia is gastroesophageal reflux. This occurs when stomach acid moves up the esophagus to the pharynx, causing discomfort. Other causes may include: stroke; progressive neurologic disorder; the presence of a tracheostomy tube; a paralyzed or unmoving vocal cord; a tumor in the mouth, throat, or esophagus; or surgery in the head, neck, or esophageal areas.

Symptoms of Swallowing Disorders May Include:

When dysphagia is persistent and the cause is not apparent, the otolaryngologist–head and neck surgeon will discuss the history of your problem and examine your mouth and throat. This may be done with the aid of mirrors or a small tube (flexible laryngoscope), which provides vision of the back of the tongue, throat, and larynx (voice box). If necessary, an examination of the esophagus, stomach, and upper small intestine (duodenum) may be carried out by the otolaryngologist or a gastroenterologist. These specialists may recommend X-rays of the swallowing mechanism, called a barium swallow or upper G-I, which is done by a radiologist.

If special problems exist, a speech pathologist may consult with the radiologist regarding a modified barium swallow or videofluroscopy. These help to identify all four stages of the swallowing process. Using different consistencies of food and liquid, and having the patient swallow in various positions; a speech pathologist will test the ability to swallow. An exam by a neurologist may be necessary if the swallowing disorder stems from the nervous system, perhaps due to stroke or other neurologic disorders.

Many of these disorders can be treated with medication. Drugs that slow stomach acid production, muscle relaxants, and antacids are a few of the many medicines available. Treatment is tailored to the particular cause of the swallowing disorder.

Gastroesophageal reflux can often be treated by changing eating and living habits — for example:

If these don’t help, antacids or other medications may provide relief.

Many swallowing disorders may be helped by direct swallowing therapy. A speech pathologist can provide special exercises for coordinating the swallowing muscles or restimulating the nerves that trigger the swallow reflex. Patients may also be taught simple ways to place food in the mouth or position the body and head to help the swallow occur successfully.

Some patients with swallowing disorders have difficulty feeding themselves. An occupational therapist can aid the patient and family in feeding techniques. These techniques make the patient as independent as possible. A dietician or nutritional expert can determine the amount of food or liquid necessary to sustain an individual and whether supplements are necessary.

Surgery is used to treat certain problems. If a narrowing or stricture exists, the area may need to be stretched or dilated. If a muscle is too tight, it may need to be dilated or even released surgically. This procedure is called a myotomy and is performed by an otolaryngologist–head and neck surgeon.
Many causes contribute to swallowing disorders. If you have a persistent problem swallowing, see an otolaryngologist–head and neck surgeon.

Once the cause is determined, swallowing disorders may be treated with: