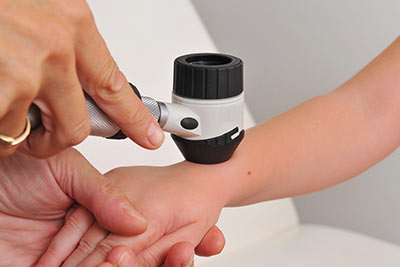 Instances of skin cancer are becoming more and more common in the Canton, Jasper, and Blue Ridge area. The doctors at the Sinus and Allergy Institute of Georgia specialize in treating this potentially dangerous condition. Half of the battle is being well informed. The links below have more information about skin cancer, treatment, prevention tips, and more.

Skin cancer is the most common form of cancer in the United States. More than 500,000 new cases are reported each year, and the incidence is rising faster than any other type of cancer. There are many different types of skin cancer, with various causes and preventive measures you can take. While skin cancers can be found on any part of the body, about 80% appear on the face, head, or neck, where they can be disfiguring as well as dangerous.

Who Gets Skin Cancer, and Why?

The primary cause of skin cancer is ultraviolet radiation, most often from the sun, but also from artificial sources like sunlamps and tanning booths. In fact, researchers believe that our quest for the perfect tan, an increase in outdoor activities, and perhaps the thinning of the earth’s protective ozone layer are behind the alarming rise we’re now seeing in skin cancers.

Anyone can get skin cancer, regardless of your skin type, race or age, and regardless of where you live or what you do. But your risk is greater if:

Basal and squamous cell carcinomas can vary widely in appearance. The cancer may begin as small, white or pink nodules or bumps that may be smooth and shiny, waxy, or pitted on the surface. It also might appear as a red spot that’s rough, dry, or scaly; a firm, red lump that may form a crust; a crusted group of nodules; a sore that bleeds or doesn’t heal after two to four weeks; or a white patch that looks like scar tissue.

Malignant melanoma is usually signaled by a change in the size, shape, or color of an existing mole, or as a new growth on normal skin. Watch for the “ABCD” warning signs of melanoma:

Asymmetry – a growth with unmatched halves
Border irregularity – ragged or blurred edges
Color – a mottled appearance, with shades of tan, brown, and black, sometimes mixed with red, white, or blue
Diameter – a growth more than 6 millimeters across (about the size of a pencil eraser) or any unusual increase in size. 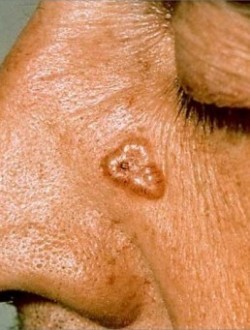 By far the most common type of skin cancer is basal cell carcinoma. Fortunately, it’s also the least dangerous kind. It tends to grow slowly, and rarely spreads beyond its original site.

Though basal cell carcinoma is seldom life-threatening, if left untreated, it can grow deep beneath the skin and into the underlying tissue and bone, causing serious damage (particularly if it’s located near the eye). Basal cell carcinoma may come in many forms. It often begins as a small, pearly nodule. 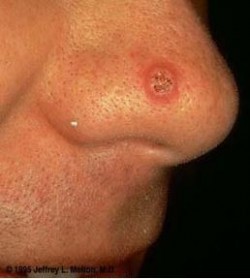 Squamous cell carcinoma is the next most common kind of skin cancer, frequently appearing on the lips, face, or ears. It sometimes spreads to distant sites, including lymph nodes and internal organs.

Squamous cell carcinoma can become life threatening if it’s not treated. Squamous cell carsinoma may begin as a red, scaly patch, a group of crusted nodules, or a sore that doesn’t heal. 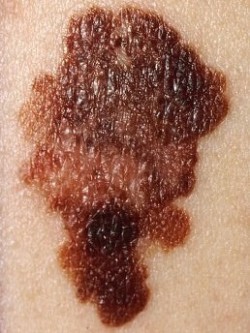 If discovered early enough, it can be completely cured. If it’s not treated quickly, however, malignant melanoma may spread throughout the body and is often deadly. Malignant melanoma is often asymmetrical, with blurred or ragged edges and mottled colors.

Other Skin Growths You Should Know About

Two other common types of skin growths are moles and keratoses.

Moles are clusters of heavily pigmented skin cells, either flat or raised above the skin surface. While most pose no danger, some-particularly large moles present at birth, or those with mottled colors and poorly defined borders-may develop into malignant melanoma. Moles are frequently removed for cosmetic reasons, or because they’re constantly irritated by clothing or jewelry (which can sometimes cause pre-cancerous changes). Solar or actinic keratoses are rough, red or brown, scaly patches on the skin. They are usually found on areas exposed to the sun, and sometimes develop into squamous cell cancer.

If a growth is determined to be suspicious, the next step is to perform a biopsy. The area is made numb, and a portion of the lesion or the entire lesion is removed and sent to a lab. This simple, quick procedure is performed in the office. If a melanoma is detected, treatment is guided by how deep in the skin the melanoma is.

If the cancer is small, the procedure can be done quickly and easily, in an outpatient facility or the physician’s office, using local anesthesia. The procedure may be a simple excision, which usually leaves a thin, barely visible scar. Or curettage and desiccation may be performed. In this procedure the cancer is scraped out with an electric current to control bleeding and kill any remaining cancer cells. This leaves a slightly larger, white scar. In either case, the risks of the surgery are low.

If the cancer is large, however, or if it has spread to the lymph glands or elsewhere in the body, major surgery may be required. Other possible treatments for skin cancer include cryosurgery (freezing the cancer cells), radiation therapy (using x-rays), topical chemotherapy (anti-cancer drugs applied to the skin), and Mohs surgery, a special procedure in which the cancer is shaved off one layer at a time.