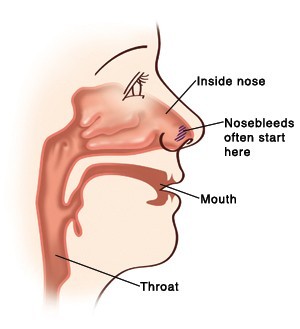 The nose is an area of the body that contains many tiny blood vessels or arterioles that can break easily. In the United States, one of every seven people will develop a nosebleed some time in their lifetime. Nosebleeds can occur at any age but are most common in children aged 2-10 years and adults aged 50-80 years.

Nosebleeds are divided into two types, depending on whether the bleeding is coming from the front or back of the nose.

What is an Anterior Nosebleed?

Most nosebleeds or epistaxes begin in the lower part of the septum, the semi-rigid wall that separates the two nostrils of the nose. The septum contains blood vessels that can be broken by a blow to the nose or the edge of a sharp fingernail. Nosebleeds coming from the front of the nose (anterior nosebleeds) often begin with a flow of blood out one nostril when the patient is sitting or standing.

Anterior nosebleeds are common in dry climates or during the winter months when dry, heated indoor air dehydrates the nasal membranes. Dryness may result in crusting, cracking, and bleeding. This can be prevented by placing a light coating of petroleum jelly or an antibiotic ointment on the end of a fingertip and then rub it inside the nose, especially on the middle portion of the nose (the septum).

How to Stop an Anterior Nosebleed

More rarely, a nosebleed can begin high and deep within the nose and flow down the back of the mouth and throat even if the patient is sitting or standing.

Obviously, when lying down, even anterior (front of nasal cavity) nosebleeds may seem to flow toward the back of the throat especially if coughing or blowing the nose. It is important to try to make the distinction between the anterior and posterior nosebleed, since posterior nosebleeds are often more severe and almost always require a physician’s care. Posterior nosebleeds are more likely to occur in older people, persons with high blood pressure, and in cases of injury to the nose or face.

When Should a Doctor be Consulted?

If frequent nosebleeds are a problem, it is important to consult an otolaryngologist. An ear, nose, and throat specialist will carefully examine the nose using an endoscope, a tube with a light for seeing inside the nose, prior to making a treatment recommendation. Two of the most common treatments are cautery and packing the nose. Cautery is a technique in which the blood vessel is burned with an electric current, silver nitrate, or a laser. Sometimes, a doctor may just pack the nose with a special gauze or an inflatable latex balloon to put pressure on the blood vessel.

How to Prevent a Nosebleed