What is a Middle Ear Infection?

When referring to an ear infection, doctors most likely mean “acute otitis media” rather than the common ear infection called swimmer’s ear, or otitis externa. Otitis media is an infection of the middle ear, the area just behind the eardrum. It happens when the eustachian tubes, which connect the middle ear to the nose, become blocked with fluid. When an infection occurs, mucus, pus, and bacteria can accumulate behind the eardrum, causing pressure and pain. Most ear infections usually begin with a cold or upper respiratory infection and occur in 75% of all children. 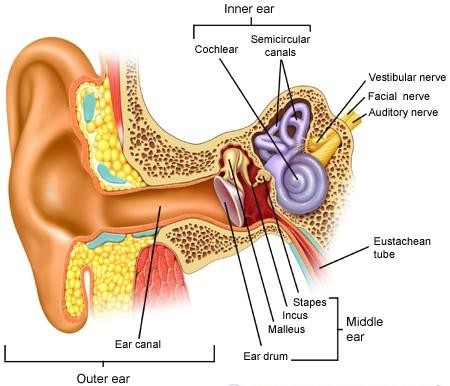 What Causes a Middle Ear Infection?

In children there are two main reasons that middle ear infections occur. The first is their eustachian tubes are shorter and more horizontal than those of adults, which allows bacteria and viruses to find their way into the middle ear more easily. A child’s eustachian tubes are also narrower and less stiff, which makes them more prone to blockage. The other reason is from enlarged adenoids. Adenoids are lymph tissue which sits in the back of the nose close to the eustachian tube opening. If enlarged enough they can block the eustachian tubes preventing them from draining properly. A number of other factors can contribute to kids getting ear infections, such as exposure to cigarette smoke, bottle-feeding, and day-care attendance.

What are the Signs and Symptoms of an Ear Infection?

When the middle ear becomes acutely infected, pressure builds up behind the eardrum frequently causing intense pain. An older child may complain of an earache, but a younger child may pull at the ear or simply act irritable and cry more than usual especially at night. Lying down, chewing, and sucking can also cause painful pressure changes in the middle ear, so a child may have a decreased appetite and difficulty sleeping. Fever is also common with an acute infection, however is often absent when fluid without infection (serous otitis media) builds behind the eardrum. If the pressure from the fluid buildup is high enough, it can cause the eardrum to rupture, resulting in drainage of fluid from the ear. This releases the pressure behind the eardrum, usually bringing relief from the pain.

Treatment for a Middle Ear Infection

Most ear infections clear up on their own. Studies have shown that in two thirds of children by 24 hours symptoms of otitis media resolve without the use of antibiotics and since antibiotics tend to be overused for treating ear infections, the Academy of Pediatricians and the American Academy of Family Physicians guidelines suggest taking a wait and see approach for 72 hours if:

If symptoms persist for longer than 72 hours then antibiotics may be required usually with amoxicillin being a first line agent. Numbing ear drops may also be prescribed to help ease the discomfort of otitis media.

When are Ear Tubes Necessary?

In cases where infections fail to respond to antibiotics, the infections are recurring (about 5-6 in a year), or fluid builds behind the ear drum and becomes chronic causing hearing loss, tympanostomy tubes are recommended.In children tubes are placed under general anesthesia as an outpatient procedure. The procedure is fairly quick lasting only 10-15 minutes. The child is then awoken from anesthesia and watched for about an hour and then goes home the same day. There is virtually no recovery time with this procedure with most kids returning to school and normal routine the following day.

Feel free to contact our offices in the North Georgia area for more information. We have locations in Canton, Jasper, and Blue Ridge.